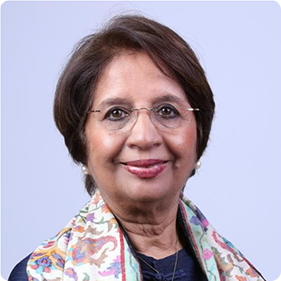 Nirupama Rao (72) was appointed as a Non-Executive Independent Director on the Board of ITC effective April 8, 2016.

A Post Graduate in English Literature, she is also a Fellow - Harvard University (1992-93), Fellow - Brown University (2014-16), Jawaharlal Nehru Fellow, and a recipient of the Degree of Doctor of Letters (Honoris Causa) from the Pondicherry University. She was conferred with the Vanitha Ratna by the Government of Kerala in 2016. She is currently a Global Fellow of The Wilson Center in Washington, D.C., Council Member of the World Refugee & Migration Council and of the Indian Institute of Science, Bengaluru, and a Member on the Board of US-India Business Council. She is also a Member of the Board of Governors of the Indian Institute of Management, Bangalore, a Trustee of the Museum of Art & Photography and of the Indian Music Experience, both in Bengaluru, and Chairperson of the India Trustee Board of the American India Foundation, besides being a Member of the Board of Governors of the Indian Council for Research on International Economic Relations, and a Founder Trustee of The South Asian Symphony Foundation, Bengaluru.

A career diplomat from the Indian Foreign Service from 1973 to 2011, she served the Government in several important positions including that of the Foreign Secretary of India. She has represented India in several countries during her distinguished career and was the first Indian woman to be appointed High Commissioner to Sri Lanka and Ambassador to China. She was also the first woman spokesperson of the Ministry of External Affairs. After her retirement, she was appointed Ambassador of India to the United States for a period of two years from 2011 to 2013. She is the author of 'The Fractured Himalaya: India Tibet China, 1949 to 1962', published in 2021.

She is also an Independent Director of KEC International Limited and JSW Steel Limited, amongst others.