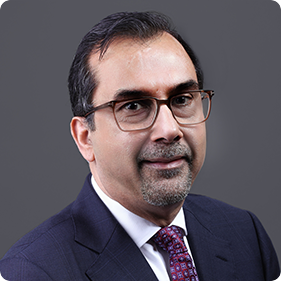 Sanjiv Puri (60) is the Chairman & Managing Director of ITC Limited.

Puri was appointed as a Wholetime Director on the Board of ITC with effect from December 6, 2015, Chief Executive Officer in February 2017 and re-designated as the Managing Director in May 2018. He was appointed as the Chairman effective May 13, 2019. An alumnus of the Indian Institute of Technology, Kanpur, and Wharton School of Business, USA, he has recently been conferred an Honorary Doctorate by the XIM University, Bhubaneshwar.

Puri joined ITC in January 1986. During his career of over three decades at ITC and its subsidiaries, he has held several business leadership positions and also handled a wide range of responsibilities in manufacturing, operations and information & digital technology. Puri served as the Chief Operating Officer of ITC between July 2016 and January 2017, and prior to that as President - FMCG Businesses since December 2014. Earlier, he was the Divisional Chief Executive of the Tobacco Division since 2009, with additional responsibility for the Company's Trade Marketing & Distribution Vertical. He led ITC Infotech India Limited ('I3L'), a wholly owned subsidiary of ITC, as its Managing Director from May 2006 to August 2009. Presently, Puri is the Chairman of I3L and its wholly owned subsidiaries in the UK and the USA. Puri served between October 2001 and April 2006 as the Managing Director of Surya Nepal Private Limited, a joint venture subsidiary company of ITC in Nepal, and is presently its Chairman.

Spearheading the 'ITC Next' vision, Puri has driven an extensive strategy reset to define new vectors of growth for each business with greater focus on consumer-centricity, agility and innovation to build an even more competitive, future-ready and inclusive enterprise. Puri's emphasis on purposeful and cutting-edge innovation has led to the creation of sharp focused R&D platforms in areas aligned to market opportunities, that has led to the launch of several first-to-market products addressing dynamic and evolving consumer preferences. Given his deep conviction that mega trends like Digital and Sustainability will reshape the future, Puri has passionately rallied the organisation to develop capabilities, channelise investment and resources to enhance competitiveness of existing businesses and also identify tech-enabled growth opportunities. Lending new wings to ITC's credo of 'Nation First: Sab Saath Badhein', he has articulated an ambitious Sustainability 2.0 vision that will enlarge ITC's contributions to a net-zero economy and meaningfully support national priorities.

Puri has served as the Chairman of the Expert Group constituted by the Fifteenth Finance Commission of the Government of India to promote agri-exports, and was a Member of the technology discussion group 'Farm to Table -driving India's agriculture sector digitally' constituted by the NITI Aayog.

Presently, Puri serves as the Vice President of CII for the financial year 2022-23. He is the Chairman of the Advisory Council of the CII-ITC Centre of Excellence for Sustainable Development. He is also the Chairman of the CII National Council on Agriculture and Member of the CII Economic Affairs Council as well as the CII Policy Council. Puri is also on the Governing Board and the Executive Board of the Indian School of Business, Hyderabad. He is a Director on the Board of US-India Strategic Partnership Forum, Co-Chair of the 'Business Commission to Tackle Inequality' set up by the World Business Council for Sustainable Development, Member of the BRICS Business Council and also a Member of the Governing Body of the National Council of Applied Economic Research.

Puri was conferred the 'Distinguished Alumnus Award of the year 2018' by the Indian Institute of Technology, Kanpur. He was also honoured with the 'IMPACT Person of the Year, 2020' Award by exchange4media, a leading online news platform.