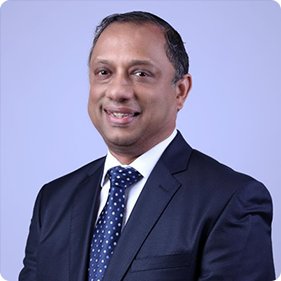 Sumant Bhargavan (59) was appointed as a Wholetime Director on the Board of ITC effective November 16, 2018. He oversees the Paperboards, Paper and Packaging as well as the Personal Care and Education & Stationery Products Businesses of the Company, and also the Trade Marketing & Distribution ('TM&D') Vertical. Sumant, an alumnus of the National Institute of Technology, Durgapur, joined ITC in January 1986, and has handled a wide range of responsibilities across several businesses.

Prior to his appointment as a Director on the Board of ITC, he was President - FMCG Businesses since April 2016. Earlier, he was the Divisional Chief Executive of the Tobacco Division. He also held additional responsibility of the TM&D Vertical as its Chief Executive for a period of one year from October 2016. He spent his first 19 years with ITC in Manufacturing operations of the Tobacco Division and has worked in four production units as well as at the Head Office. In October 2004, he moved to the Foods Business and set up the Snack Food category under the brand name 'Bingo!'. He has led ITC Infotech India Limited, a wholly owned subsidiary of ITC, as its Managing Director from September 2009 to October 2014. He has also been on the Boards of ITC Infotech's wholly owned subsidiaries in the UK and the USA.

Sumant has also been a Director on the Board of The Tobacco Institute of India and Surya Nepal Private Limited, a joint venture subsidiary company of ITC in Nepal. Presently, he serves as Member of the CII Eastern Region Council and the General Committee of The Tollygunge Club Limited.