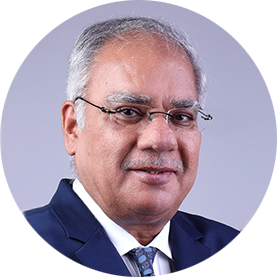 S Sivakumar oversees Agri and IT Businesses of the Company. He also holds responsibility for ITC's Social Investments Programme. Additionally, he is the Chairman of Technico Agri Sciences Limited and Vice Chairman of ITC Infotech India Limited and its subsidiaries in the UK and USA.

Topper of the Class of 1983 from the Institute of Rural Management (IRMA), Sivakumar worked with a farmers' cooperative for six years before joining ITC in 1989. He was the Divisional Chief Executive of the Agri Business Division from 1996 till 2017, during which the e-Choupal initiative was developed and executed under his leadership.

Earlier, Sivakumar has been a member on the Boards of NABARD and IRMA. He was the Chairman of the National Agricultural Council of the CII, Vice Chairman of the WEF's Global Agenda Council on Social Innovation and UN Global Compact's Core Advisory Group to develop Sustainable Agriculture Business Principles.