Visit of the US Secretary of State Hillary Rodham Clinton
to the ITC Green Centre July 19, 2009

Visit of the US Secretary of State Hillary Rodham Clinton
to the ITC Green Centre July 19, 2009 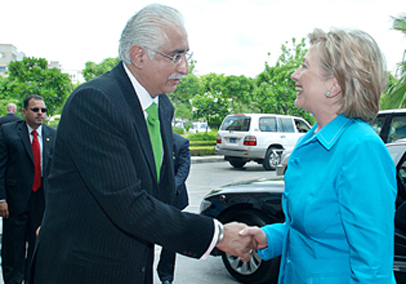 Address delivered by Secretary Clinton at the ITC Centre

Address delivered by Secretary Clinton at the ITC Centre 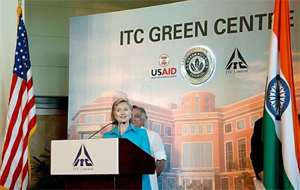 Thank you very much, Todd, and thanks to all of you for making us feel so welcome, once again, here in this historic capital, and particularly in this remarkable building. As you notice, other than the lights that are up there for the television cameras, there are no lights on. And there are so many features of this building that really demonstrate the viability of the kind of low-carbon but very attractive and efficient approach to saving energy and doing it in a way that, as we heard, saves water and solid waste, and certainly lowers the carbon footprint.

I want to join in thanking the minister and all who participated in our discussion. I thought it was extremely helpful, and I am particularly grateful to the minister for his presentation and recommendation of the three specific ways that the United States and India can work together. And I told him that we will immediately be following up on that.

I want to thank Mr. Haksar from ITC, and all who are associated with ITC, and Chairman Jain of the Indian Green Building Council, along with all of you who care deeply about this issue.

I am also pleased to be accompanied by our new ambassador from the United States to India, Ambassador Tim Roemer.

The tour that we have, the information that we were given, certainly underscores the importance of the ITC commitment and the partners who work with ITC. And then, the conversation that we had with representatives of the Indian government reinforces the commitment that India is making. 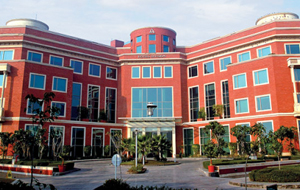 We know that there are wonderful monuments throughout India, from the India gates to the Taj Mahal, and so many others. But today we are at another Indian monument. The ITC Green Center may not be a regular stop on the tourist map, and no one would confuse it with the Taj Mahal. But it is a monument in its own right. It is a monument to the future. And that is the most important monument.

This Green Center not only represents the promise of a green economy, it demonstrates the importance of partnership between India and the United States in the 21st century.

We often talk about our democracy, the oldest continuing democracy and the world's largest democracy. We want to show that democracies deliver. And that is what both the United States and India are committed to doing. 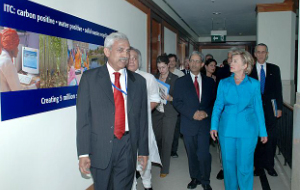 As we were taking the tour, I saw many posters that illustrated the steps that ITC is taking to do so much in reforesting, and in putting people to work in sustainable ways. And I also saw a picture of two people I know very well, my husband and my daughter, because when Bill and Chelsea were here on that memorable State visit in 2000, he witnessed the signing of the U.S.-India framework agreement on clean energy. And that agreement led the establishment of the Indian Green Building Council, which contributed to the flourishing green building movement across India. In collaboration with India, the United States government and the United States Green Building Council were instrumental in helping to bring this building to fruition. And today the Green Center is one of 11 buildings in India that has earned the elite platinum designation, the highest you can get.

How India and the United States can amplify this partnership and work together to devise a comprehensive, strategic approach to climate change and a clean energy future is an important topic of my trip. We discussed it yesterday with business leaders in Mumbai. We discussed it today with leaders from both the Indian government and Indian businesses. And it will, of course, be on my agenda for the meetings that I will have, starting tomorrow.

The times we live in demand nothing less than a total commitment. The statistics are there for everyone to see. And as both of our nations reaffirmed at the Major Economies Forum just recently held in Italy, and moderated by President Obama, we need a successful outcome in Copenhagen later this year. 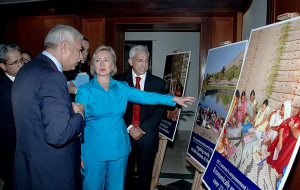 Now, President Obama, Special Envoy Stern, and I are under no illusion that this will be easy, because the challenge is to create a global framework that recognizes the different needs and responsibilities of developed and developing countries alike. And I not only understand, but I agree with the concern of countries like India. The United States and other countries that have been the biggest historic emitters of greenhouse gases should shoulder the biggest burden for cleaning up the environment and reducing our carbon footprint. And certainly President Obama has put our country on the path to doing that.

And no one wants to in any way stall or undermine the economic growth that is necessary to lift millions of more people out of poverty. So, I want to make two points as clearly as I can.

First, the United States does not and will not do anything that would limit India's economic progress. We believe that economic progress in India is in everyone's interest, not just India's. To lift people out of poverty and to give every child born in India a chance to live up to his or her God-given potential is a goal that we share with you. But we also believe that there is a way to eradicate poverty and develop sustainably that will lower significantly the carbon footprint of the energy that is produced and consumed to fuel that growth.

And secondly, we in the United States, under the Obama administration, are recognizing our responsibility and taking action. So, therefore, addressing climate change and achieving economic growth, in our view, are compatible goals. And we know, as we look at the forecast of rising sea levels and changing rainfall and melting glaciers that India is a country very vulnerable to climate change. But it is also a country most likely to benefit from clean energy policies that are key to economic sustainability in the 21st century.

So, that is why I am very confident -- and even more so after the discussion we just had, led by the minister -- that the United States and India can devise a plan that will dramatically change the way we produce, consume, and conserve energy. And, in the process, start an explosion of new investments and millions of jobs. India already has the innovative and entrepreneurial spirit, the knowledge base to be a big winner if we feed these opportunities of energy efficiency and renewable energy.

Now, certainly the business leaders with whom I have spoken are talking about how the private sector can play a role, along with government. Just consider the potential here. If all new buildings were designed to the same standards as the ITC Green Center is, we could eventually cut global energy use and greenhouse pollution by more than 20 percent, and save money at the same time.

While improving energy efficiency is critical, it is only half the battle. We also need to accelerate efforts to bring clean power to the people of India by expanding the use of renewable energy, particularly for rural electrification, so that hundreds of millions of men, women, and children will have real energy options.

India is already demonstrating a commitment to renewable energy in wind energy and in plans for scaling up solar manufacturing and power production and solar lantern programs to bring light to rural villages. And the economy is benefitting, as Indian solar companies such as Tata BP, Titan Energy, and others respond.

There is no question that developed countries like mine must lead on this issue. And for our part, under President Obama, we are not only acknowledging our contributions to greenhouse gas emissions and climate change, we are taking steps to reverse its ill effects. We passed a stimulus bill through our congress where we are investing now $80 billion in clean energy technology. And we have set ambitious new vehicle fuel economy standards.

At the State Department we have just established a new program that will link some of our West Coast cities with Indian and Chinese cities to help transfer clean energy technology. And we have taken up our own green diplomacy initiative, which means our embassies, the ones we build, all of those that we currently have in operation, are going to have to become greener.

And, above all, the President has committed to passing a law that has already passed through one house of our congress that will deal with significant reductions in greenhouse gas emissions. But it is essential for major developing countries like India to also lead. Because over 80 percent of the growth in future emissions will be from developing countries.

Now, China is, by far, the largest emitter in the world right now, and certainly the largest among developing countries. But India's own greenhouse gas pollution is projected to grow by about 50 percent between now and 2030. So, climate change would not be solved even if developed countries stopped emitting greenhouse gas emissions today, unless action is taken across the world. So we have to work together. And I was very heartened, and I agree with the minister's comment that we must achieve an agreement in Copenhagen that is equal to the task.

I will find inspiration from the ITC Green Center, this monument for the future. It uses half as much energy as conventional buildings, and energy savings means that it will pay back its additional up-front costs in only six years.

So, this building is a model of environmental stewardship and economic development, all wrapped up in one. And it is an inspiration. And it will keep us going through the long days and nights of actually hammering out an agreement, one that is fair and understanding, and doesn't sacrifice economic progress, one that we will be proud of, and one that we will then be able to tell our children in generations to come, "When the crisis was upon us, we took action, and we took it together."

Thank you all very much.