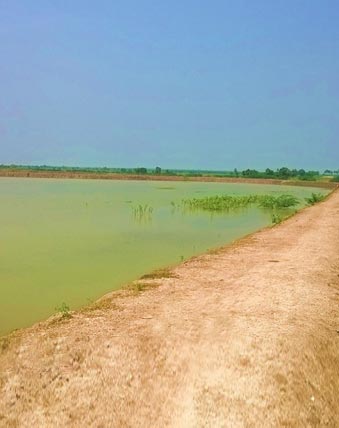 Over centuries, ponds in villages have played a critical role in flood moderation, drought mitigation and have been the primary source of water for agriculture as well as for household use. However, encroachment of such water bodies is a recurrent issue in rural India. Poor maintenance and silting often encourage villagers to use silted land for farming. This results in acute shortage of water, especially during summer months.

The village of Nadendla located in the Guntur district of Andhra Pradesh is home to 'Ankamma Kunta', a hundred-year-old tank spread across 30 acres. Few years ago, this tank had been converted for agricultural use and farmers were growing cotton, pulses and chilli. As a result, Nadendla also became one among the many villages where pond encroachment resulted in perennial water crisis.

Having understood the critical demand for water in the village, ITC worked out a joint programme in partnership with the Government, Local Community and the Village Panchayat to rebuild 'Ankamma Kunta'.

First, the farmers who had encroached upon the pond land were convinced to vacate, highlighting that their contribution could provide continuous water supply to over 2500 households and completely save their village from water crisis for the next two decades.

Then, the villagers were mobilized to actively participate in conservation and management of the waterbody. Their participation was institutionalized with the formation of a 'Sangham' which supervised the following activities:

Now, even in the peak of summer, when most of the water bodies in villages dry up in Andhra Pradesh, 'Ankamma Kunta' is a source of sustenance for the villagers of Nadendla.