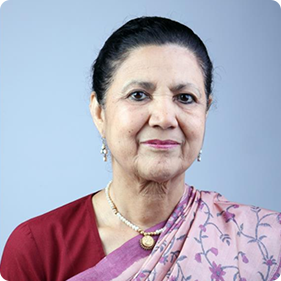 Meera Shankar (71) was appointed as a Non-Executive Independent Director on the Board of ITC effective September 6, 2012.

A Post Graduate in English Literature, she joined the Indian Foreign Service in 1973 and had an illustrious career spanning 38 years. She served in the Prime Minister's Office for six years from 1985 to 1991 working on foreign policy and security matters. Thereafter, she led the Commercial Wing in the Indian Embassy in Washington as Minister (Commerce) till 1995. She returned as Director General of the Indian Council of Cultural Relations overseeing India's cultural diplomacy. She has had extensive experience in South Asia having worked on Bangladesh, Sri Lanka and Maldives as Under Secretary and Deputy Secretary in the Ministry of External Affairs. Later, as Joint Secretary she headed divisions dealing with neighbours, Nepal and Bhutan, and the South Asian Association for Regional Cooperation ('SAARC'). As Additional Secretary, she handled the UN and international security issues. She served as Ambassador of India to Germany from 2005 to 2009 and then to the United States from 2009 to 2011.

She is also an Independent Director of Pidilite Industries Limited and Adani Transmission Limited, amongst others.